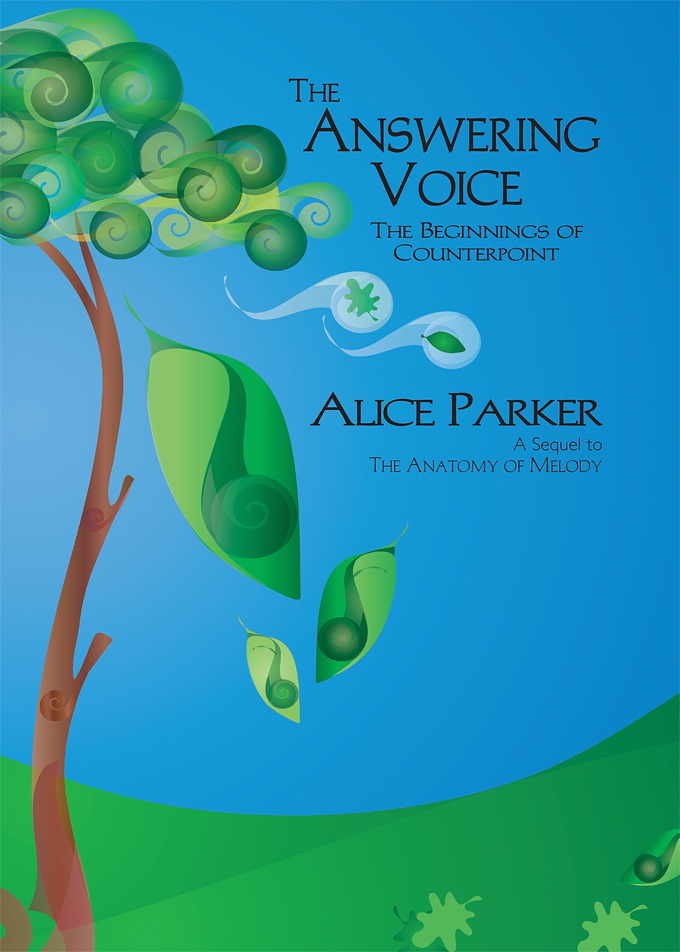 The Beginnings of Counterpoint—A Sequel to "The Anatomy of Melody"

Notes on a page are like leaves on a tree: They live only when connected to twig, branch, bough, trunk and roots. They are the result of growth, not the beginning of it.

The Answering Voice opens our ears and voices to a new way of understanding counterpoint. Drawing on her fifty years of composing and teaching, Alice Parker envisions a theory or composition class where everyone sings. Great melodies are the basic material: they teach us how to create great responses.

Instead of a written line constructed by ancient rules, two singers play a game in song. One sings the melody in a way that invites an answer, and the other improvises an immediate response. Often the answering voice finds only one or two notes to echo. But these are the beginning of a two-part choral arrangement that grows out of the melody itself.

Musicians learn how to enter fearlessly into group improvisation, then how to plan an entire arrangement based on improvised ideas. Creating that second voice is both a challenge and a delight. It is in many ways the beginning of the craft of the composer, something different from the gift.

Composers, conductors, singers, instrumentalists, teachers, and students at all levels will be challenged and rewarded by this sound-based approach to theory.

We write what we sing, rather than the other way around. We are making music as we learn how ideas drawn from living sound may grow into a complete setting. But you—the reader-singer—must bring the song to life before any words or printed notes can become music. Can we create an answer worthy of the song?

Composer, conductor, and teacher Alice Parker says that she sang before she spoke. What an appropriate beginning for a career that has spanned almost six decades and has been devoted to the creation of works for the human voice.

She began composing at the age of five and wrote her first orchestral score while still in high school. At Smith College and The Juilliard School, she studied composition and conducting, beginning her long association with Robert Shaw. Their many settings of American folk songs, hymns, and spirituals form an enduring repertoire for choruses all around the world.

Through the years she has continued composing in all the choral forms, from opera to cantata, from sacred anthems to songs on texts by distinguished poets. She has been commissioned by such well-known groups as Chanticleer, the Vancouver Chamber Singers, and the Atlanta Symphony, as well as hundreds of community, school, and church choruses.

Now a resident of western Massachusetts, Miss Parker has published books on melodic styles, choral improvisation, and “Good Singing in Church.” Five videos have been released showing her work with hymnody. She is the recipient of six honorary doctorates and numerous awards including the Smith College Medal, the ACDA Robert Shaw Award, and the AGO Composer of the Year.In recognition of her many years of service, she has been named Director Laureate by Chorus America. Her work has been supported by grants from ASCAP, the National Endowment for the Arts and the American Music Center.