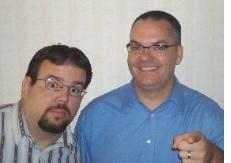 
Oddwalk Ministries consists of Shannon Cerneka, Orin Johnson, their families, friends, and all of you! Shannon and Orin officially founded Oddwalk Ministries in 2004 after many years of a more informal existence. It exists to help young and old alike embrace life as Eucharistic people through fun, upbeat, and interactive music and witnessing.

Oddwalk has performed in front of thousands of teenagers and adults in such venues as NCYC comedy clubs, World Youth Day catechetical sessions, and several diocesan youth rallies and conferences. 2008 will mark their first appearance at the Youth Day of the L.A. Religious Education Congress and at the NCEA National Convention. Oddwalk has also performed in parish settings, helped lead retreats and prayer services, and has made countless other appearances.

After recording several self-produced CDs, in 2007 Oddwalk agreed to record and publish with GIA Publications, Inc. Their first CD with GIA, an album of music for prayer and liturgy titled "Walk Away Different" was released in the Fall of that year, and many Oddwalk songs are awaiting publication.